#What is a monorepo ?

The monorepo term is a compound word between "mono", from Ancient Greek "mónos", that means "single" and "repo" as a shorthand of "repository".

A monorepo is a strategy for storing code and projects in a single repository.

#What are they useful for ?

Monorepos allow you to reuse packages and code from another modules while keeping them independent and isolated. This is particularly useful when you have a ton of code that you're constantly repeating on different projects.

Dependencies are hoisted to the root level of the project, that means you can share dependencies across all the packages that you have in your monorepo. This reduces the overhead from updating and managing multiple versions of the same dependency.

Making cross-repo changes within different repositories is painful. Typically involves manual coordination between teams and repos. For example let's say you have an API that is used by many clients and you want to make a breaking change into the contract. It's not trivial to apply the update to all the clients and then coordinate the deploy of the projects and so on. With a monorepo it's easier since everything is contained in a single unit.

Before considering to implement a monorepo architecture, make sure you have the problems that this concept solves ⚠️. There's no need to overengineer a project. Remember keep it simple ✨

Now that we know what is a monorepo, the tools that we're going to use and what are they useful for, let's create a real example to see how it works.

Let's begin creating our monorepo 👏. The first thing we need to do is define the structure of the project. In this example I created two directories:

After that, we're going to create package.json to define the workspaces and dependencies of our monorepo.

The workspaces field is what Yarn uses to symlink our code to the node_modules in order to reuse and import the code, we'll see this later on.

Finally we install lerna as a devDependency to manage the monorepo.

Now, let's define how Lerna is going to manage our monorepo in a lerna.json configuration file.

We finished our setup 🙌! Let's add some simple code to see how we can manage and reuse packages on our monorepo.

A package inside our monorepo context, is an isolated and reusable piece of code. That means, every time we want to create a new package, we're going to create a new independent directory.

Each package needs to have a package.json with the name and version fields defined. This is important because this describes how we're going to import and use this package on the code base. You can also have dependencies in your package if you need them. On this example I'm writing a simple package called sayHello.

Think of every directory inside the packages/ folder as an isolated module, with his own tests, dependencies and code.

This was pretty simple right? Now let's say that we have an application that it's called cli. In order to use sayHello package we should add it as a dependency on the package.json file. To do that we have a fancy yarn command 🎉

Now from our cli application we can import and use the package! 💯

Finally, we run our cli application from the command line using Lerna 🚀 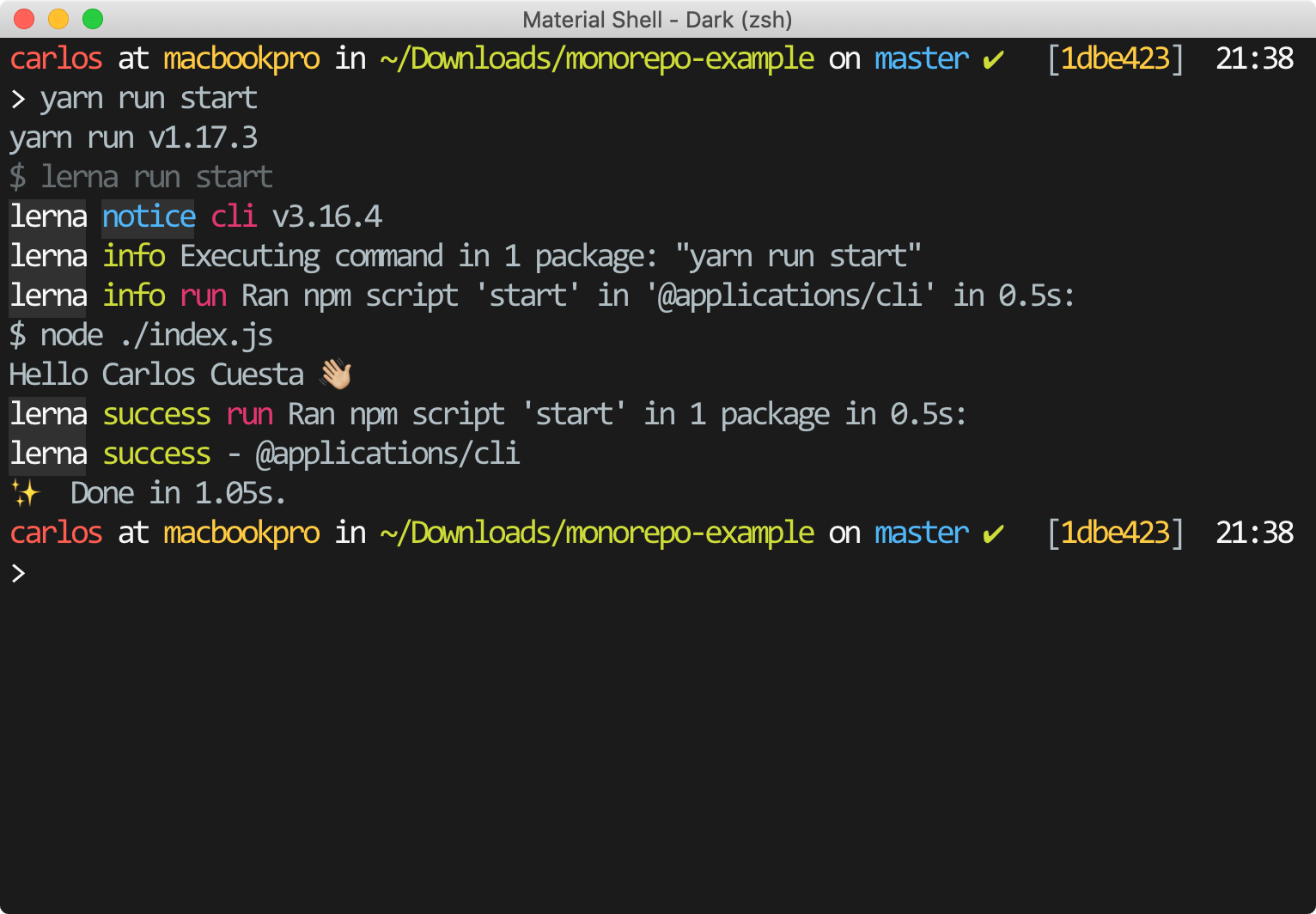 You can find the example explained on the post on this GitHub repository 👀. I know this was pretty simple, but there are a ton of things you can do with monorepos! For example you can share react components in different applications while keeping them isolated. But take a look below 👇 to see monorepos on big open source projects!

Here's a list of well known open source projects that are using the monorepo architecture: