A year ago I wrote a post about how Fastlane could help us to improve our React Native apps shipping process. At that moment even though everything was automated, the deployment relied on one of us with a provisioned machine in order to launch the rocket 🚀. We could improve easily that process by continuously delivering our apps through a CI machine. That's when Travis CI comes to the rescue! 👷🏻‍♂️

Before explaining what's the problem, it's important to understand the complexity of our deployment process.

In a nutshell we have two platforms: iOS 🍏, Android 🤖 and every platform compiles two applications: Beta testing app also known as Canary 🐤 and Production 🚀 one.

Now let's see in depth every step of the deployment process to understand what we do.

Signing native applications is scary 😱, specially when you come from the JavaScript ecosystem. Certificates, provisioning profiles, keys... You have to be utterly organized when using them in a development team.

We adopted the codesigning.guide concept through Fastlane. Basically this idea comes up with having a specific git repository to store and distribute certificates across a development team. We store both iOS and Android code signing files on an encrypted private git repository that lives on GitHub.

Then, our CI machine on every deploy clones the repository and installs the decrypted certificates. On iOS the CI creates an OS X Keychain where the certificates are installed.

Every platform has his own way to manage versions and build numbers. The difference between those two is that the version should be used as the public store number that identifies a new release, and the build number is an incremental identifier that bumps on every build.

Those attributes are stored on .plist, .pbxproj, .properties and .gradle files. To automate and do version management we use the package.json version number as the source of truth for our public version numbers 💯. This allows us to use npm version cli command to manage bumps.

We need to provision two machines to build and compile our native applications.

For iOS we setup a macOS system with Xcode, because it's the only way to compile and sign the application. On Android we provision a Linux system, with all the Android Studio, packages and tools that we need.

Those machines are created by our CI, that means every build runs on a new fresh and clean environment 💻.

To distribute the application to beta testers we use TestFlight on iOS and HockeyApp for Android. We tried Google Play Beta but it was too slow on the app roll out compared to HockeyApp.

To distribute the application to the stores we upload the production build to TestFlight on iOS and Google Play Store for Android. The release is done manually by a human being.

To get human readable information about crashes and errors, we use a service called Bugsnag. Every time we deploy a new build, we need to upload debug symbols .dSYM and sourcemaps to Bugsnag.

Finally, when the apps are deployed, we need to inform our beta testers, release manager and developers, that we have a new version. We use Slack with a bot that sends alerts to some channels.

Every time we wanted to do a release, we had to manually fire 🔥 the Fastlane deployment lanes. That means that human factor was needed. This was a time consuming process that often failed due to code sign, biased environments, software updates, native platform dependencies...

#Machines should work, people should think.

Definitely we decided to end with those problems by automating all the things!

The solution is to implement this automated process into a system that continously delivers our master branch pushes up to the stores magically 🎉, giving freedom to the manager to decide when a new release comes up. Finally, we could forget about everything and be happy! ❤️

Now we're going to take a look on how we integrated Travis and Fastlane to automate the deployment of our apps 👏.

We have two deployment lanes one for Android and one for iOS. I've simplified the lanes a little bit for the explanation to focus on the important parts of it. First we deploy Android platform and then iOS.

The lane receives a version number that comes from the package.json, as I said before this allows us to do versioning through npm.

The first thing we do is bumping the public version number and the build number. On the iOS lane, we need to setup_certificates, to save them on the Keychain and be able to sign the apps.

After that we start the canary 🐤 and production 🚀 lanes. Those two are the ones who build the native app.

Then, we upload all the sourcemaps and debug symbol files to Bugsnag.

Next, we create a git branch where the version bumps will be commited, through the commit_and_push_version_bump lane. Later, on the iOS lane we merge the created git branch on top of master using the git_flow_merge lane. We need to commit the bumps, in order to maintain the version along with the deployments. Otherwise the stores should throw an error that the uploaded version already exists!

Finally we reach out Slack, to communicate both deployments.

So, here's how our git log, looks like after merging a branch to master and making a deploy 🙌:

We use build stages, to run our deployment process in three steps, sequentially. This allows us to deploy our apps only on the master branch when our tests passed ✅.

Let's take a look at the build stages 👇 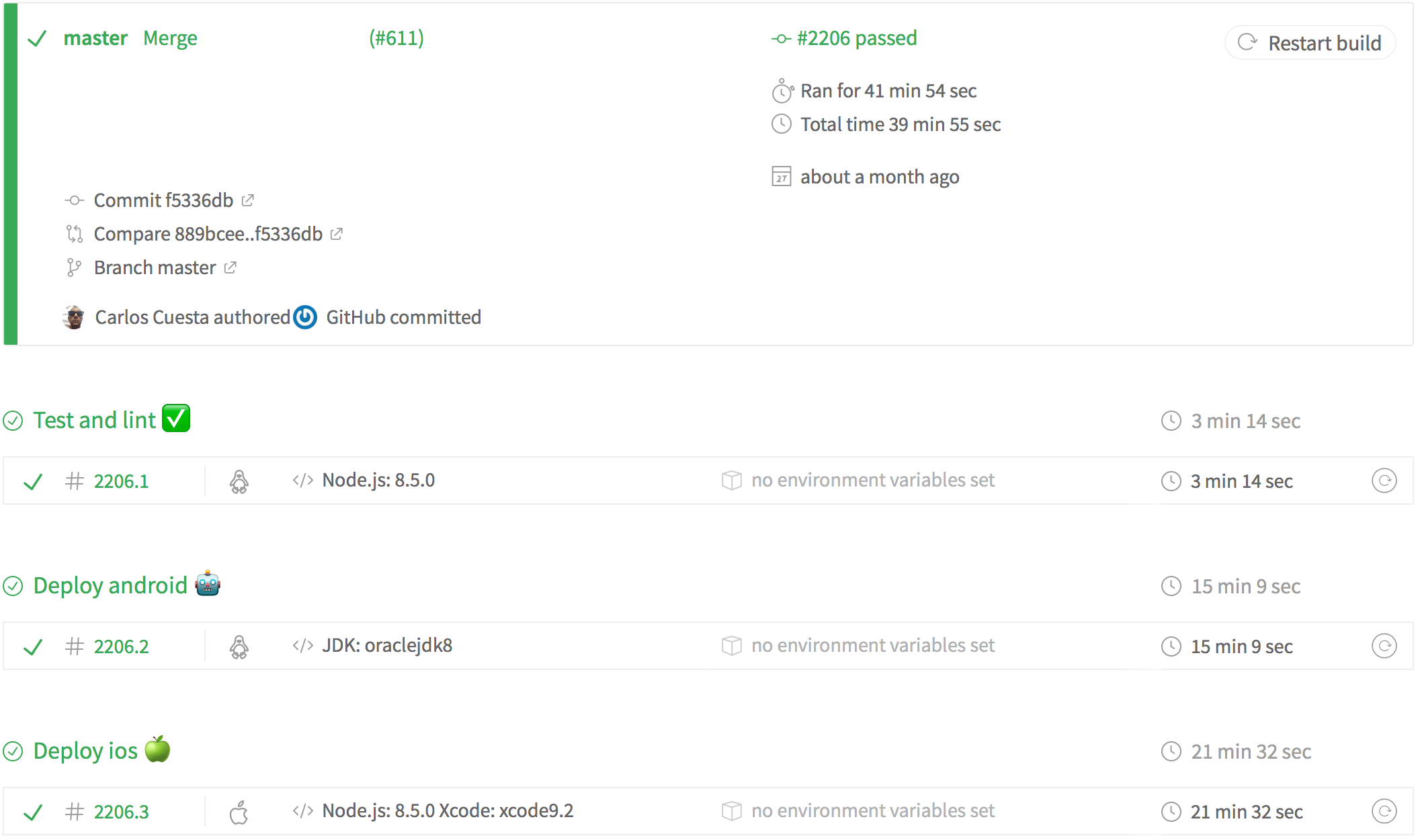 Every build stage has his own provisioning and enviroment. For instance, Deploy iOS runs on a macOS machine with Xcode and Node.js installed, while Deploy Android uses an Ubuntu machine with JDK, AndroidSDK and Node.js.

On the first stage we execute the linters and test suites. To ensure everything is working as expected. If something fails here, we automatically stop the deploy.

Android stage creates a provisioned Ubuntu machine with all the software and dependencies needed. Then we build the Canary 🐤 and Production 🚀 applications apps. After that we deploy them. In around 15 minutes ⏰ our Android apps ship. 👏

iOS stage creates a provisioned macOS machine with Xcode and all the dependencies needed. Then we build the Canary 🐤 and Production 🚀 apps. After that we deploy them. In around 20 minutes ⏰ our iOS apps ship. 👏